Despite greatly decreased activity at my blog, I did not want to let the end of the year go by without posting my favorite photos of the year meme. For a number of reasons, I spent less time behind the lens in 2017. Despite this, I was unable to narrow my choices to 10. There are 16 to consider.

Women March, Norfolk 2017
(1/21/17)
The first photo on my list was taken at the Women's March in January. After listening to the terribly disheartening American Carnage inauguration speech just the day before, the sights I saw during the march lifted my spirits, and gave me hope for our country. I was particularly impressed by this father who brought his young children to the march, while mom was either deployed or otherwise working. 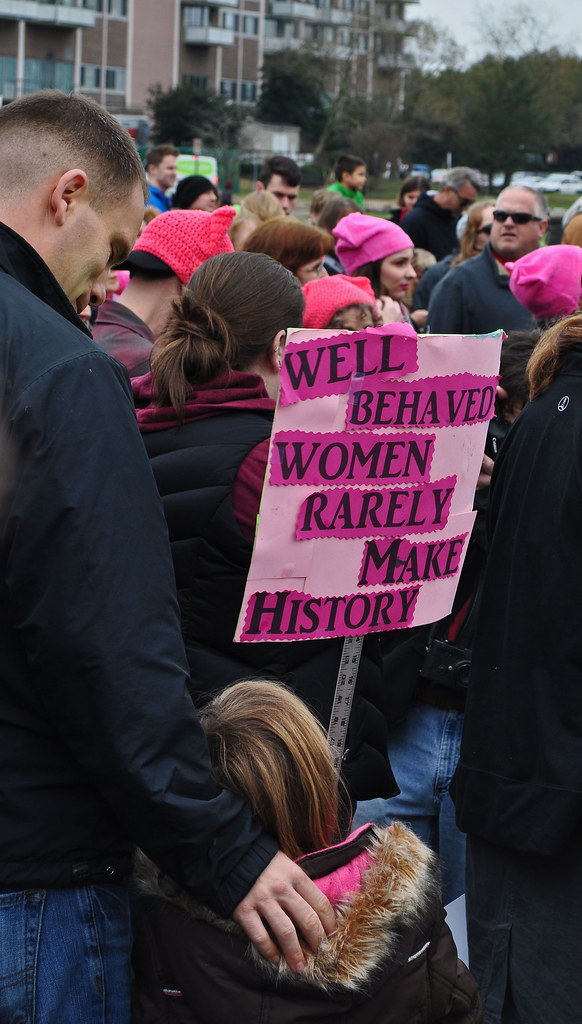 Chelsea
(2/19/17)
On my Winter Walk-Off bike ride, I came across this rough-looking storage building in the Chelsea neighborhood of Norfolk. The blooming Oxalis and the emerging Narcissus foliage made me smile, especially in contrast with the peeling paint. 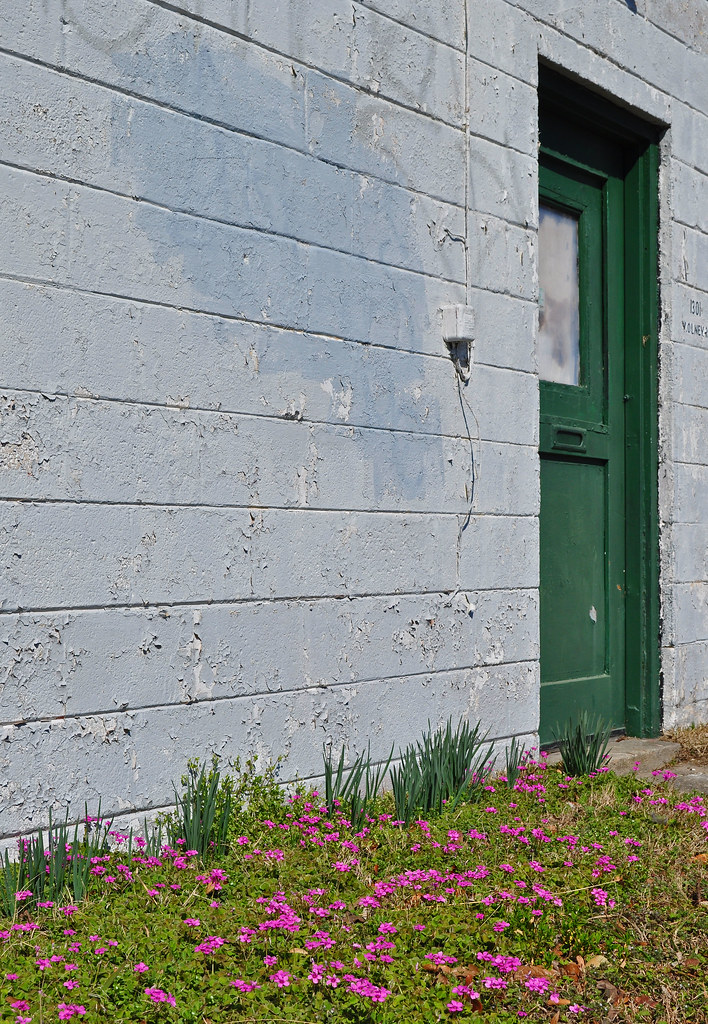 Oyster, Virginia
(3/19/17)
On one of several trips to Virginia's Eastern Shore, we took the scenic way home and stopped for some photos in the small seaside town of Oyster. There is a marsh adjacent to the town's harbor where hackberry trees (Celtis species) look over a collection of derelict work boats. The photo was used in my Winter Walk-Off Wrap-Up. 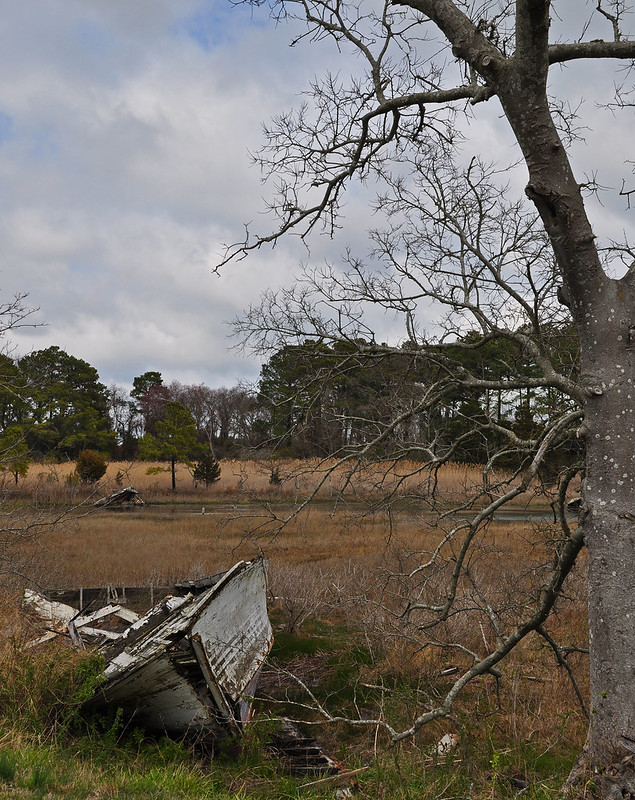 Eyre Hall
(3/28/17)
Later in March, and again on the Eastern Shore, I stopped at Eyre Hall after giving a garden club talk. I have seen the gardens at Eyre Hall on several occasions, but never this early in the season. The visit turned out to be quite photo-productive. The photo below is of the the plantation's entrance lane, lined with massive eastern red cedars (Juniperus virginiana).

Western Branch Reservoir
(5/28/17)
Bear with me, but the next 7 photos were all taken from the seat of my kayak, which for me is more like a therapist's couch. And if there was ever a year I needed therapy, 2017 was it. The photo below was taken near Suffolk, Virginia on the Western Branch Reservoir, which is one of several where my city's water comes from. The photo appealed to me because the place appealed to me. I can see retiring there at the end of a long day, adult beverage in hand. 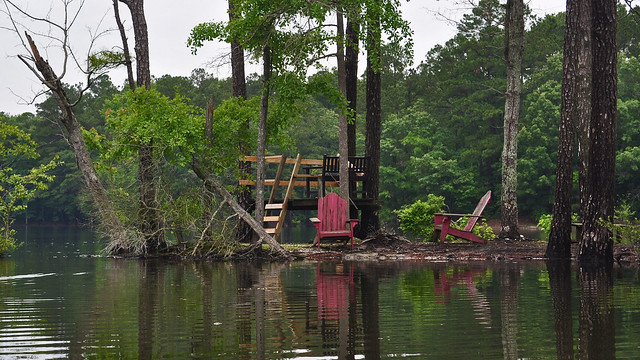 Wooded Cove
(5/28/17)
This photo was taken across the reservoir from the previous photo. The lush green moss and the fallen pine parts speak of the generally wet year we had. The cove was incredibly peaceful. 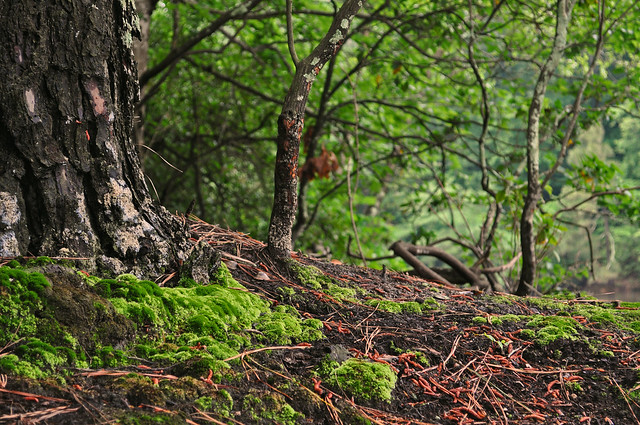 Blackwater River July 2017
(7/16/17)
I took this photo in the rain-swollen Blackwater River in mid-July. My trip that day was cut short by some of the most severe back pain I have ever had, and it would be two months before I felt well enough to get back out on the water. 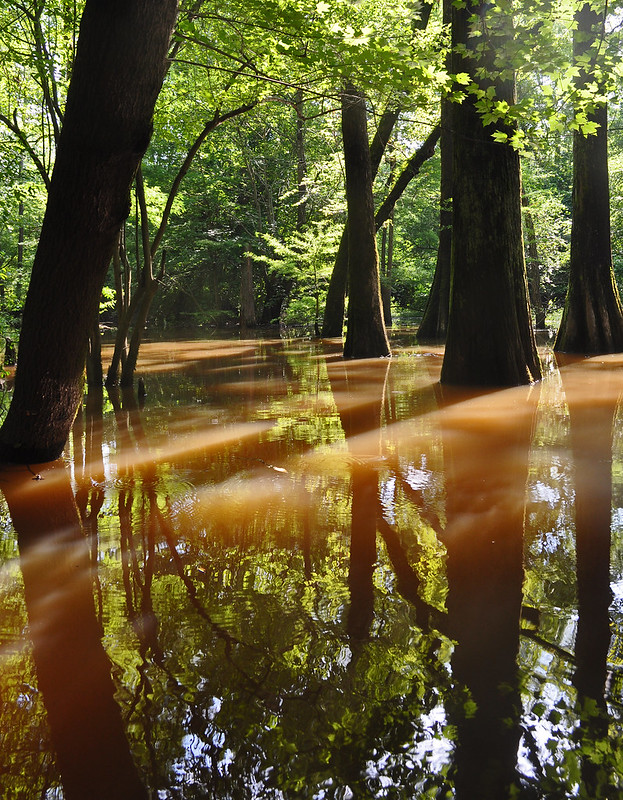 James River Piling Garden
(9/16/17)
... but get back out on the water I did. I ventured along the James near Charles City Courthouse, on what was a very beautiful September day, which was just what the doctor ordered. The plants along the river were starting to take on their fall colors, well before those further inland. 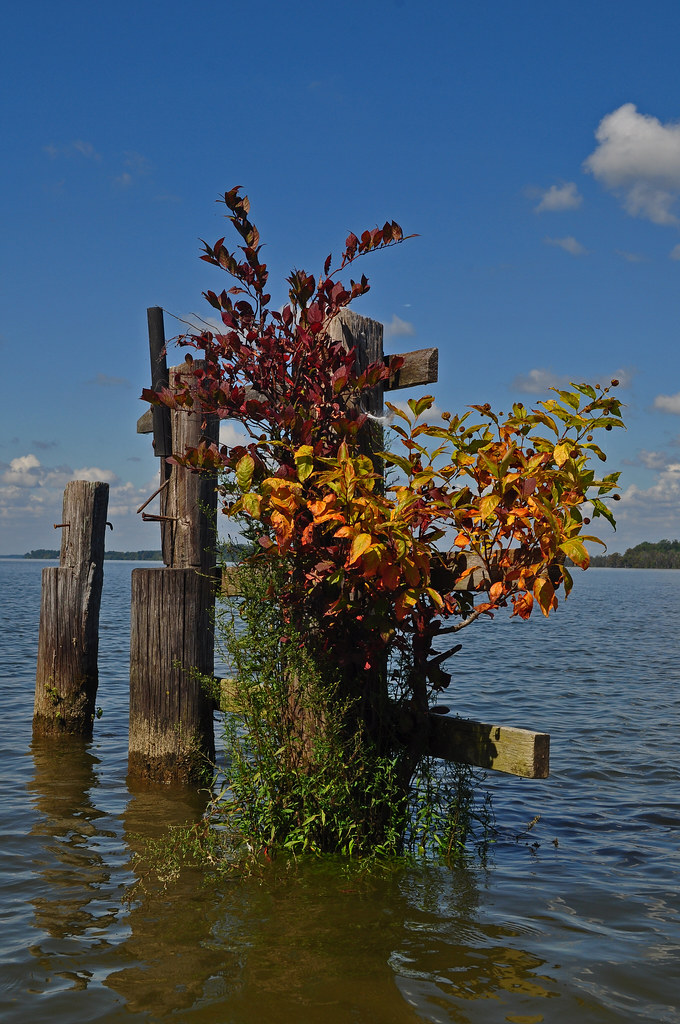 James River
(9/16/17)
On the same trip I stopped at the site below for lunch. I can't remember what I actually ate, but the interplay of sky, water, and light fed my soul. 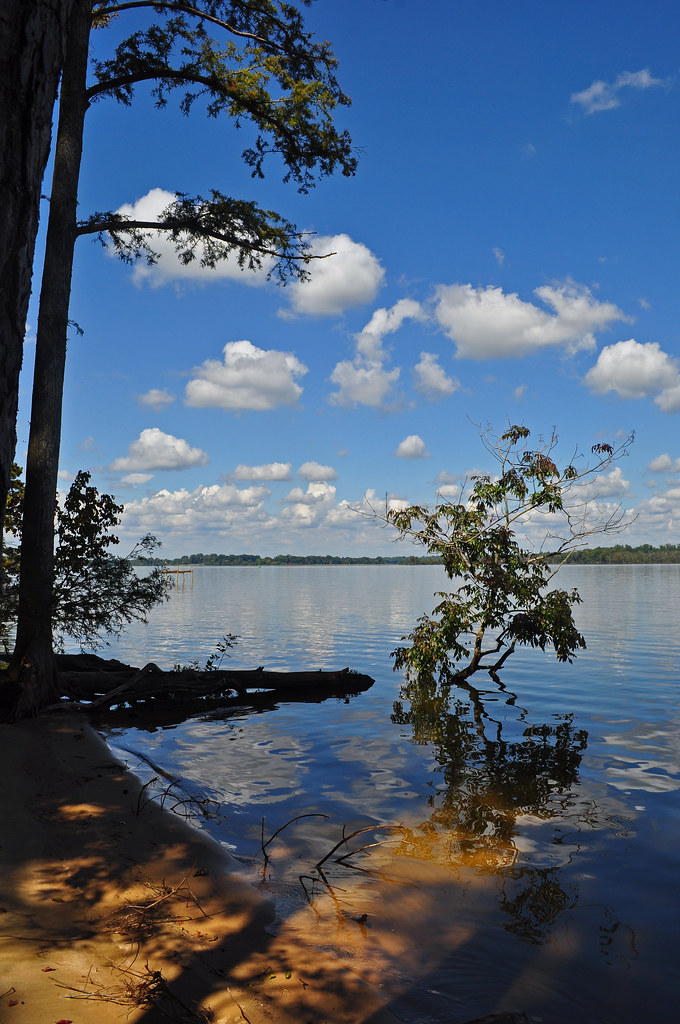 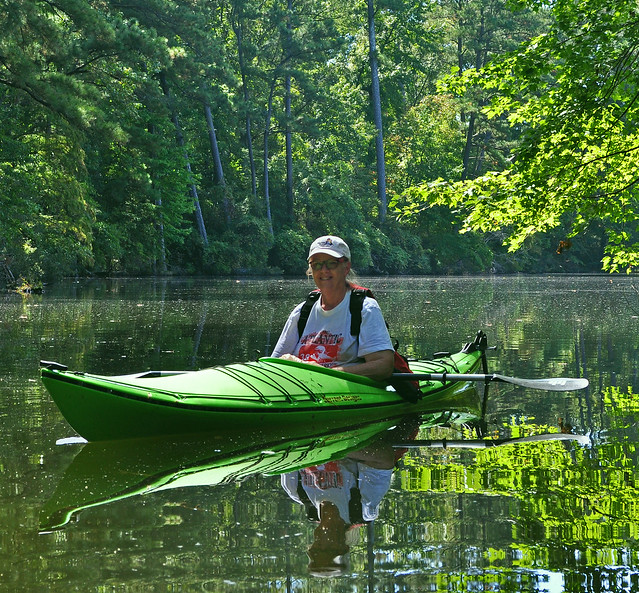 Chickahominy River with Taxodium distichum
(10/7/17)
I took another very photo-productive trip along the lower Chickahominy River in early fall. My timing was good as the bald cypress (Taxodium distichum) in the river were approaching peak fall color. This is one of my favorite places on the planet, and it happened to be another gorgeous day that recharged my batteries for weeks afterward. 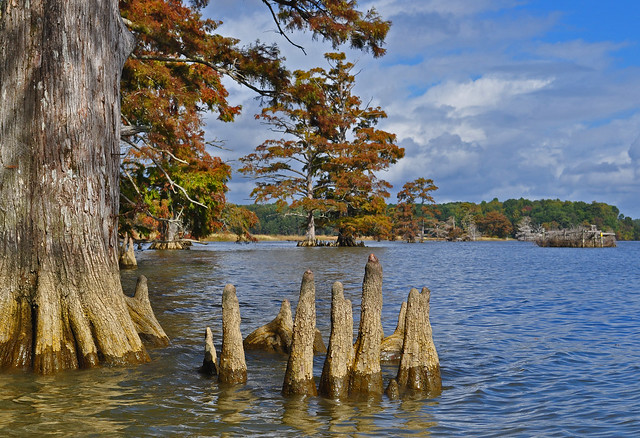 NEON District Walking Houses
(10/14/17)
In mid-October a coworker and I participated in a rain garden planting in Norfolk's NEON District. Street art is promoted in the district, and on one wall was the work of Christopher Revel, part of his Walking Houses series that addresses sea level rise. I am drawn to his images, as houses on stilts above water have been recurring images in my dreams since I was a teen. 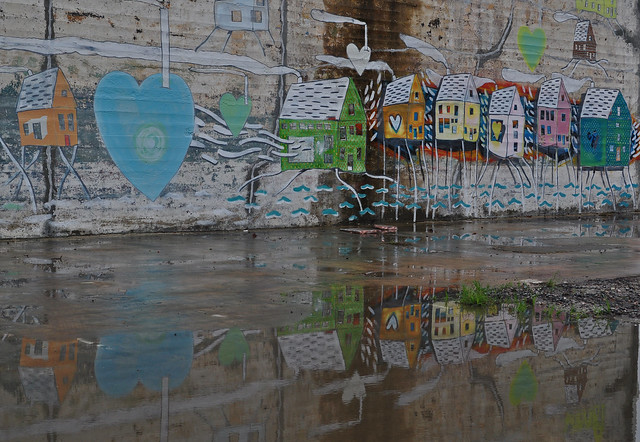 Potterfield Bridge
(10/28/17)
This past year I have had to make several trips to Richmond, not all of them for pleasant reasons. However, in late October my wife, my friend Chris (of the green kayak), and I went to Richmond to celebrate my son's 20th birthday. While there we explored the new pedestrian Potterfield Bridge that crosses over the James (blog post coming later). From the top I watched a group of colorful kayakers play in the rapids. My kayaking style and abilities are a bit more Zen-like than theirs, but I judge not.

CSX Trellis
(10/28/17)
On the same trip as above, I got this shot along the river of the sun coming through the trees, train trestle in the background. 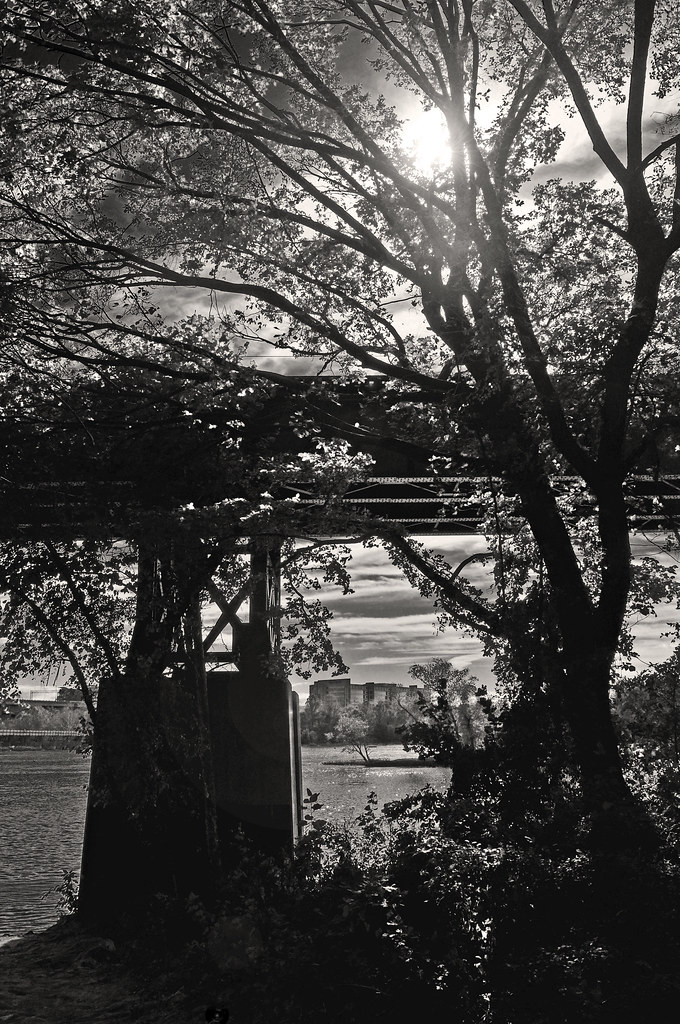 First Landing State Park Fungi
(11/4/17)
I took a nice long bike ride through First Landing State Park early in November. I enjoyed the ride and the beginnings of fall color, but I had to stop every 50 feet to admire yet another clump of mushrooms. Seeing both me and my bike on the ground, a young family stopped to see if I had crashed, calling me sir. Although I do seem lately prone to accidents, and suffer failings of varying body parts, the sir thing made me feel old. However, confusing a young family was worth it; I got some great mushroom shots. 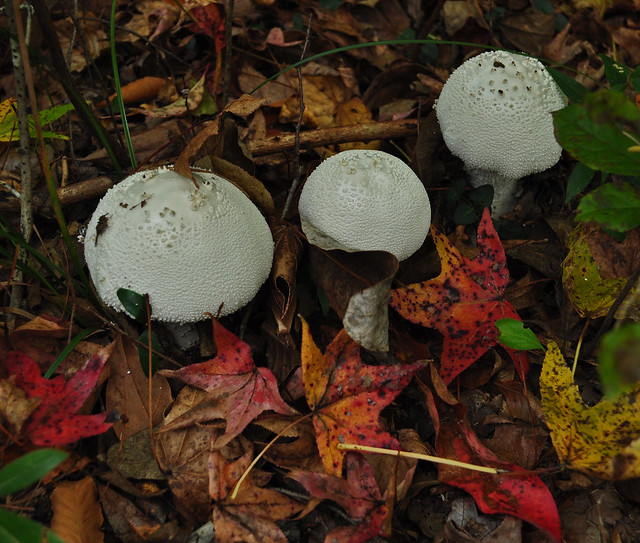 Lotus Pond
(12/8/17)
The last photo (yes, the ordeal is nearly over) was taken with my cell phone as I was crossing a stone bridge in the Japanese Garden at work. Some of those failing body parts mentioned above keep my head down to focus on where my feet are going, and looking down I noticed the perfect ephemeral arrangement of fallen pine needles, camellia blossoms, and lotus pods. 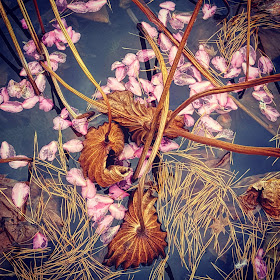 If you would like to see the rest of my favorites from 2017, you can check them out on my Flickr page.

Do you have photos from 2017 that you are particularly fond of, or that speak to you in a special way?
If so, then I welcome you to share them on your own blog or Facebook page. If you do, come back and leave a comment with a link please. I would really appreciate it. I hope all of you have a happy new year - one filled with much to photograph!
Les at 10:06 PM
Share